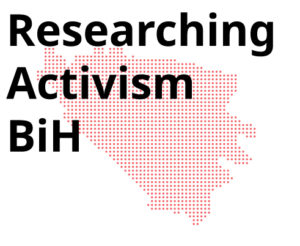 This website presents the results of a research project carried out by MA students of Cultural Anthropology and European Ethnology at the University of Goettingen. They conducted this research in the context of a research-based course on, “Humanitarian landscapes and civil society in the Balkans”. The student research project took place over two semesters, from April 2020 to May 2021. The goal was to explore ethnographically how people in the Balkans come together to work towards social change beyond the state and public institutions. Out of several civil society initiatives in Bosnia and Herzegovina (B&H) and Montenegro, the students decided to focus on four grassroots civic initiatives in B&H that bring together a broad array of activists with different backgrounds. Two initiatives were located in Mostar, one in Bihać, and one throughout B&H.

The existing body of anthropological literature demonstrates that the landscapes of “civil society” in B&H are fragmented, uneven, and complex. Postsocialist transformation, coupled with the reconciliation projects following the 1992-1995 war, has created a crowded space of governance that includes a wide array of different actors and forms of organizing. This includes large-scale international humanitarian agencies (such as the UN); uncountable local, regional, and international NGOs; and unregistered, grassroots, and self-organized civic initiatives organized by diverse local and international volunteers.

Taking the fragmented, uneven, and complex character of “civil society” in B&H into account, the student research project was envisioned as a kind of an archeology of interconnectedness. The students approached this fragmented world as a postwar, postsocialist version of a “contact zone” in Mary Louise Pratt’s (1991) terms: a social space where different histories “meet, clash, and grapple with each other” in the context of asymmetrical power relations. This is a term which is “intended in part to contrast with ideas of community that underlie much of the thinking about language, communication and culture that gets done in the academy”. This contact zone of different histories, interwoven, and contradicting at times, interconnects the region and its futures with the rest of Europe. Therefore, instead of looking for neatly distinguished “Bosnian” and “international” communities, with presumably culturally distinct ideas and practices of organizing, the students explored intersections, overlaps, tensions, and collaborations that have emerged in the narratives of differently positioned actors in the four selected grassroots civic initiatives. The initiatives demonstrated that the “(ethno-)national”, the “local”, and the “international” standpoints, with their different histories and socio-cultural capital have been made socially through everyday narrations and evoked, played with, or criticized by different actors for different purposes.

All four initiatives provided good – and different – examples of how activists claimed history and turned it into a productive arena for constructing new political subjectivities and new visions of the future. The students found in them echoes of the theoretical approach of “activist archives”, meaning the grassroots and informal production of knowledge about the present and the past, which aims to make more visible the sidelined and non-hegemonic narratives and standpoints, in the hope of opening up new political possibilities. “Activist archives” emerged in all the initiatives: in the activist reports about the border violence; in the filming and alternative mapping of the river Neretva; in the book and website that collected and presented citizens’ memories of everyday encounters with a monument in Mostar during and after the era of socialist Yugoslavia. Exploring the knowledge produced in these activist archives, as well as the motivations and reasoning people in B&H had for generating it, the students learnt about political and the social imaginaries of their interlocutors and their complex genealogy in the traces of Yugoslav socialism, the 1992-1995 war, as well as in the postwar transformation and neoliberally infused Europeanization of B&H.

The Covid-19 pandemic significantly affected the structure of the student research project. The initial plan was for the students to travel to B&H for a limited period to conduct field research. Since this was not possible, the learning methodology was reoriented to the online environment. This brought problems, as well as unexpected advantages, insofar as the links and relationships between the students and their interlocutors were consistently cultivated online throughout the duration of the research. Intentionally avoiding an extractivist approach to ethnographic fieldwork, the students were encouraged to think about their research not in terms of what they can “take” from the field site, but in terms of what they can give back or “leave behind” – while keeping in mind that the “taking” as well as “leaving behind” has a largely symbolic meaning in an online environment. Therefore, the results of their collaboration include the texts published on this website, as well as organizing one virtual book launch in Goettingen, participating in petitions organized in B&H, obtaining and buying products of other grassroots initiatives from Mostar, and so on.

In the course of twelve months, the students learnt how differently positioned actors in B&H imagined social change, its origins, and what one can do to bring it forward. They observed how they talked about problems, challenges, and difficulties; how they positioned themselves in the postsocialist, postwar contact zone of B&H “civil society” that brings together local, national, regional, and global contexts; how they used historical narratives to situate their practices in their specific environment; how they related, drew on, and intervened in the narratives of B&H as a failing European periphery that needs to “catch up” with the rest of Europe, and so forth. In doing so, the students approached the work of their activist interlocutors from a critical-affirmative perspective. This means the students avoided simply celebrating the work of their interlocutors. Instead, the students situated activist perspectives in a particular socio-historical context, while keeping visible the possibilities for generating political hope that have been opened up by these perspectives.